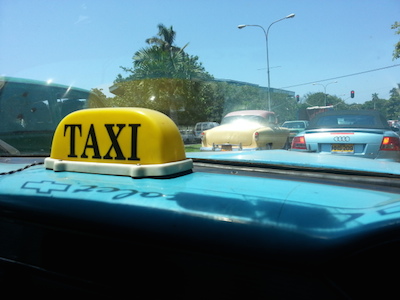 Climbing into a collective taxi at midday, with its whole body heated by the sun and creaking at every pothole, is a shocking experience. You duck your head and make yourself small to sit on the improvised seats. A loose thread hanging from your pants leg or skirt catches on a badly set screw, its metal tip never rounded off. Then comes the hardest test: accepting the driver’s musical taste, which is playing full blast. But it’s also a unique sociological experience, a journalistic look that calls you to reflect on this peculiar reality we inhabit.

Some days ago I boarded one of these old « submersibles » that roll through Havana. Pure scrap metal but with the powerful speakers of a disco. The reggaeton was deafening. Most of the lyrics were sexist, repetitive… predictable, until there was one that got me thinking. The singer was making fun of someone and spit at them, « Ah… you’re not in the package. » It only lasted a few seconds, « Ah… you’re not in the package, » but it was enough. He was referring, perhaps, to another musician or artist who didn’t appear in the compilations of the so-called « combos, » selections of audiovisuals distributed in alternative ways, which the government abhors.

It’s noteworthy that in the popular repertoire, to be left out of the « package » means to be at the lowest rung of popularity. If a certain video clip, documentary, or movie isn’t included in these alternative compilations, it’s a sign of lack of fame. Most striking is when people have the ability to put together their own « television programming, » in those gigabytes of soap operas, documentaries or musicals… they never include the official programs. That is, the Roundtable show could be the target of the acid chorus, « Ah… you’re not in the package, » and it’s true, of the primetime news, the political events and whatever speech or government declaration is broadcast on the national channels.

The voice of the Cuban Communist Party has been left out of the « package »… because it’s boring, bland, repetitive… and lacks credibility.

Read this article:
A Cuban Insult: ‘Ah… You’re Not in the Package’