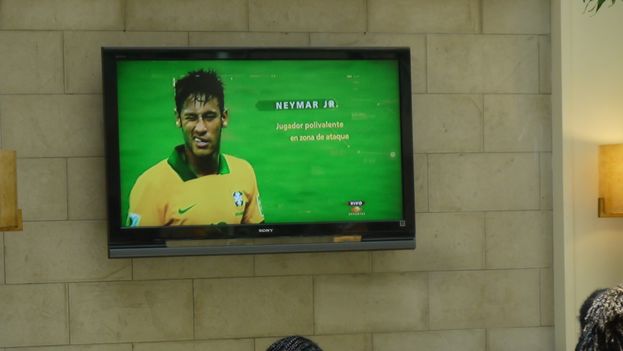 Gone is the last game, the German goal, Götze’s hands raising the 2014 Brazil World Cup. Gone are the get togethers with friends, wrapped in the flag of Italy or Costa Rica, to go see the games in some public place. Some of the excitement remains, it’s true, but the roar that ran through Havana when the ball entered the goal in Rio De Janeiro or Sal Paulo is now just a memory. The painted faces, the arms raised in imitation of the spectators from their seats, and the euphoria shared with millions all over the globe. The football party is over, now comes the hangover.

The hangover is a return to real life. Back to the store shelves and a realization that the shortages are greater than they were four weeks ago. Learning that yesterday a hundred Ladies in White were arrested for trying to pay tribute to the victims of the sinking of the 13-de-Marzo tugboat. There is no catchy tune performed by the famous to accompany this hard existence, rather the rumor of friends who warn us of « what’s out there »… « dengue fever, cholera, Chikungunya and even giant African snails. »

Like a kick to the head — and without failing to miss the opponent — reality returns. There are no arms to stop this fast ball that is daily life, unstoppable and painful. We are back to our world without lights, without loudspeakers that roar GOOOOAL, and without that familiarity created by competitive sports. In short, we live in « a world » where the rules are strict, the referee implacable, and there are no prizes.

Monday morning, I already saw them, as if waking from a dream. They were the hundreds of thousands of Cubans, especially young people, who were immersed in the passion of the Cup as if they themselves had kicked the ball. Today they realize they aren’t Germans, Dutch or Argentines and that a difficult Cuba awaits them on the other side of their doors. A Cuba that in four weeks has not stopped in time, waiting for the whistle to resume its course, rather it has deteriorated. Will they be willing to change the rules of the game of this reality? Or will they wait for the next reason to escape in front of the TV or the ball?